The war, the post-pandemic economic situation and the difficulty in accessing raw materials have compounded new and old problems. These need to be solved, for it is not human comfort but lives that are at stake. The food crisis is looming large. Is it still possible to avert it? Moreover, what role can be played by new technologies implemented in modern agriculture?

Is the world being threatened by a food crisis today?

Scarcity of raw materials such as wood or steel is not the only thing the world has to wrestle with in the aftermath of the COVID-19 pandemic. A much more pressing problem is food shortages, which endanger many regions, especially the poorest ones. These are further exacerbated by the climate crisis, which leads, in part, to year-on-year reductions in crop yields and increased production costs.

The United Nations’ World Food Program (WFP) is warning of a lack of food for millions of people due to escalating prices. In fact, the figures speak for themselves, as 20 million more people suffered from hunger in 2020 than the year before.

It would also be hard not to mention what is happening across our eastern border, with the UN officially saying that the war in Ukraine, a country that is one of the largest grain exporters in the world, will further aggravate the already existing situation. The World Bank reports that some European, Middle Eastern, African and Asian countries source up to several dozen percent of their total domestic wheat consumption from Ukraine and Russia.

As António Guterres, Secretary-General of the United Nations, urges: 'It is becoming increasingly apparent that if we do not act immediately, a food crisis is about to hit that could have long-term implications for hundreds of millions of children and adults. (…) Even in countries where food is not in short supply, there is a risk of a broken supply chain.

On the other hand, the „Global Food Crises Report,” created by the Global Network Against Food Crises, reveals that at least 155 million people in 55 countries and territories are at risk of food insecurity. Countries such as Lebanon, Syria, Yemen, the Democratic Republic of Congo and Afghanistan are particularly endangered.

What will remain? The search for new solutions that will help to eliminate a huge problem that concerns a basic human need.

First there was the farmer with a sickle, then the farmer-driver on a tractor. And who is the person who farms in the 21st century? You could say, in part, a smart technology user. Digital agriculture benefits from such modern solutions as robots, drones, automated systems, sensors and satellites. Smart farming is supposed to be rooted in the collection of detailed data, which is then used to efficiently plan work and resources. 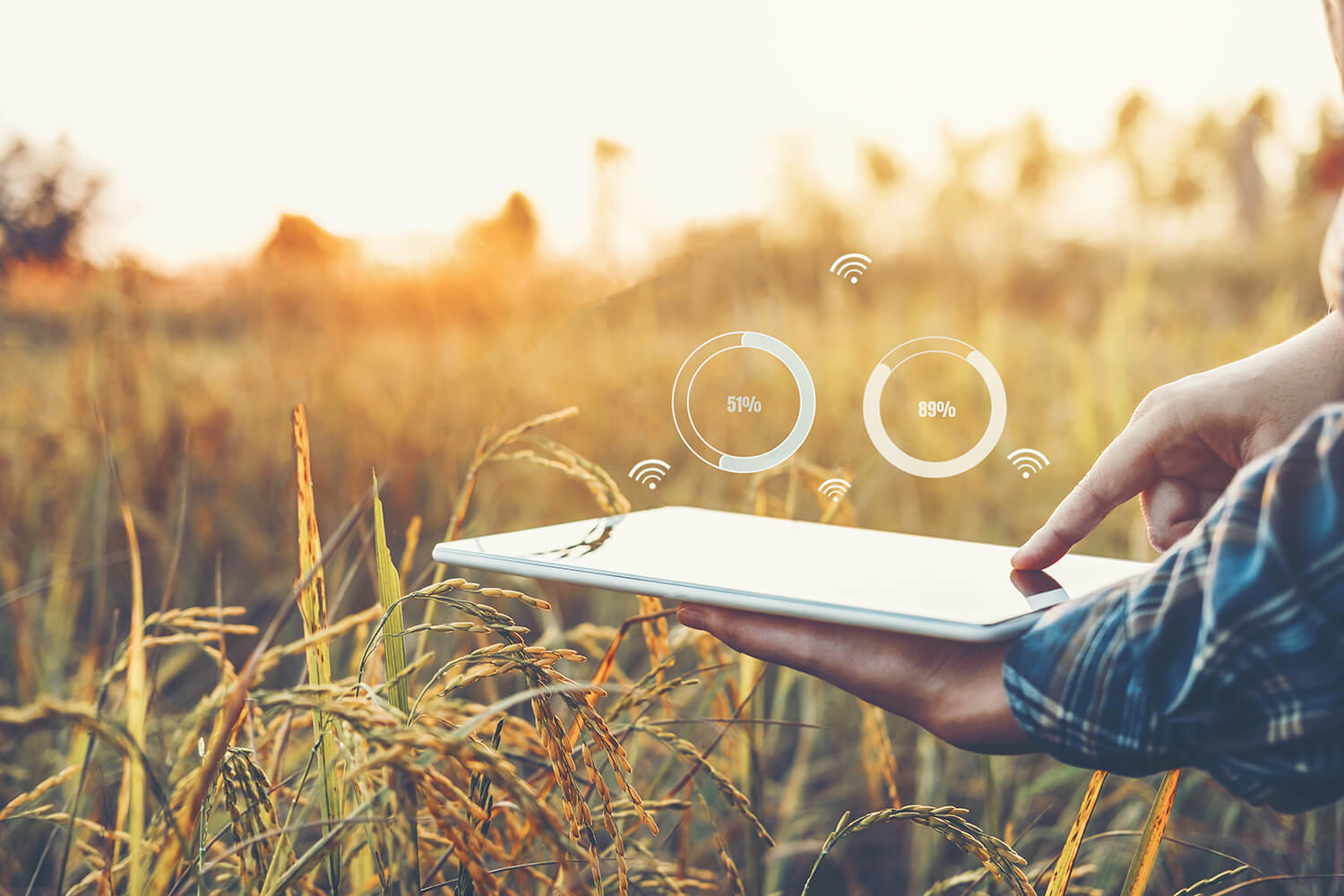 Sounds like a distant reality? It is already happening. For example, in France, where over 250 agricultural startups are today promoting the „Agri-tech” trend. This is a specially devised method that combines expert smartphone-controlled software, artificial intelligence (AI), autonomous tractors, drones or GPS satellites. This agro-technology is being rolled out with the aim of reducing waste, protecting the environment and better matching consumer needs.

Similar solutions are being tested at the Ferme Digitale association in Paris and at the InVivo cooperative, which brings together some 3,000 agricultural companies from across France. Smag, the software developed by the latter organisation, already covers 10 million hectares of farmland.

European farming today is based on two strategies: that proposed by the European Commission and that promoted by the Farm to Fork project. Both underscore the need for massive collection and sharing of data on farming and cultivation in the EU.

The goal is to create a coherent data network, fostering sustainable agriculture and allowing to monitor the efficiency of agricultural work. In 2018, nine agri-food organisations and associations signed a landmark EU Code of Conduct on this issue. 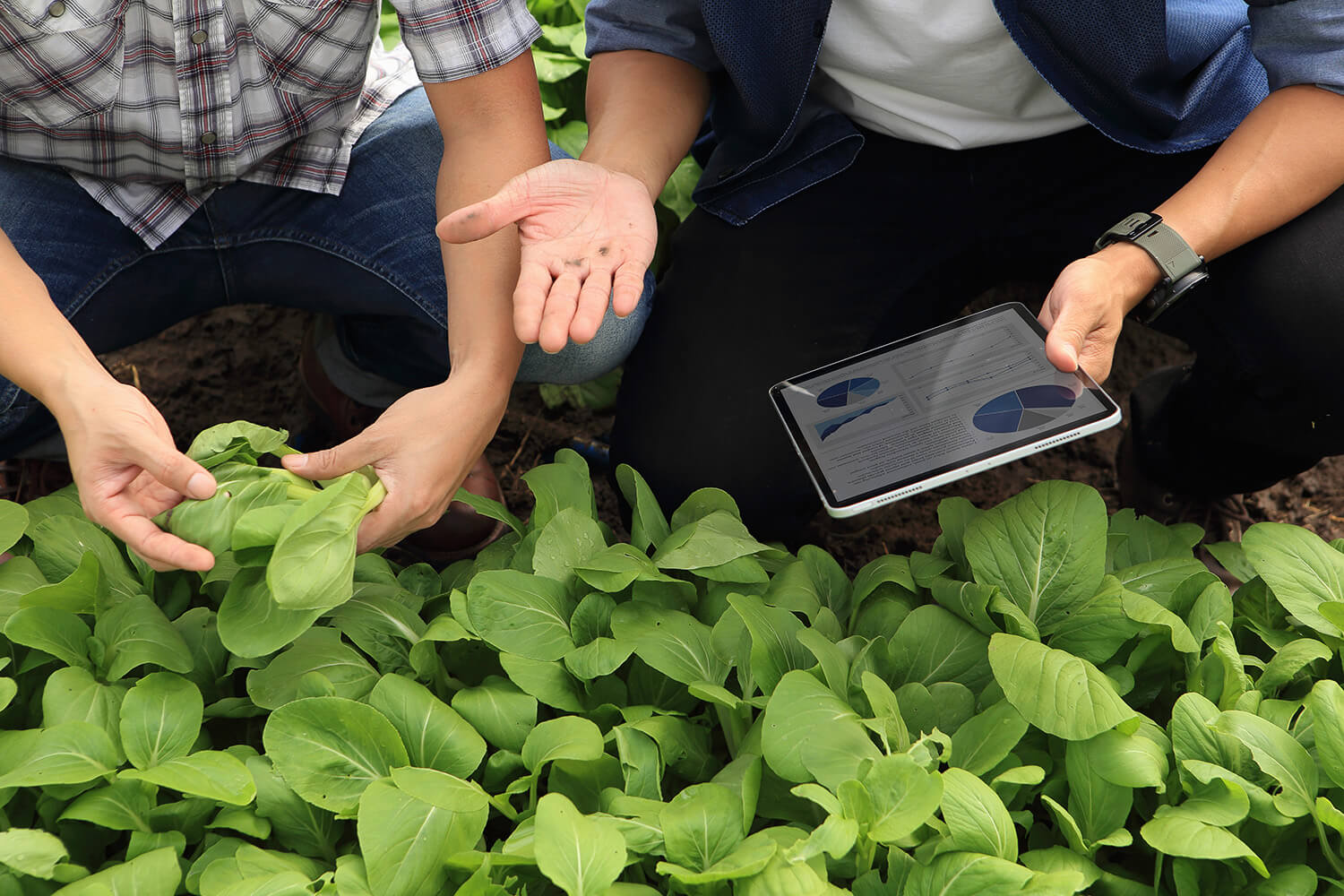 How does such a system operate in practice? The example of the dairy industry already illustrates that the use of data helps to reduce CO2 emissions and optimise the farm. Farmers are able to collect reliable data on milk yield, herd size and current feed consumption, thereby identifying areas for improvement.

Some European countries, such as Italy, Spain and Belgium, are already availing themselves of the most modern agricultural monitoring methods. The Sentinel 1 and 2 satellites, partnered by the European Space Agency, provide continuous and precise images of agricultural parcels.

The open-access photos contain precise information on the type of crops and the size of the plots. Based on this, it is also possible to determine which areas of land are not being used at all. This enables decision-makers to target aid schemes to activate areas with the strongest potential.

Unmanned aerial vehicles are revolutionising agriculture. As an example, in France, UAV drones are being used to spray pesticides on crop fields.

They are particularly well suited to inaccessible areas, e.g. steep slopes of over 30% (as is common e.g. in Alsace). On top of that, they are so precise that the phytosanitary measure is applied exactly where it is required and not „overdone” 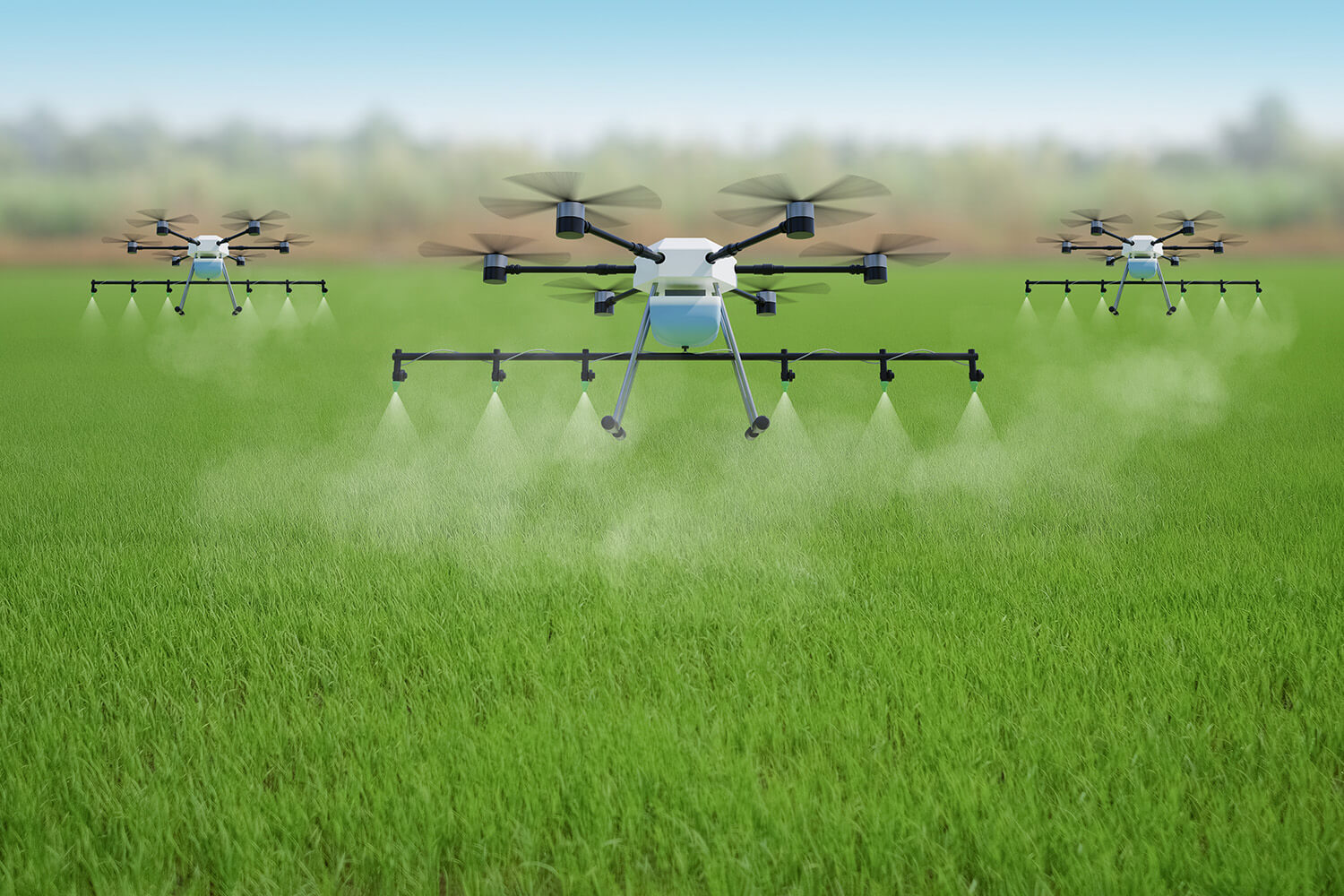 Drones fitted with cameras also facilitate the monitoring and counting of livestock.

Manual weeding involves a great deal of work and cost. Around a third of a market gardener’s time has to be spent on this activity alone, and there is still a shortage of manpower. New technologies enable this to change by easing the burden on the workforce.

Today it is impossible to do away with pesticides altogether, but they can be reduced through preventive measures, specifically by mechanical weed control. Such possibilities are offered by weeding robots, which are already being tested in e.g. French vineyards. 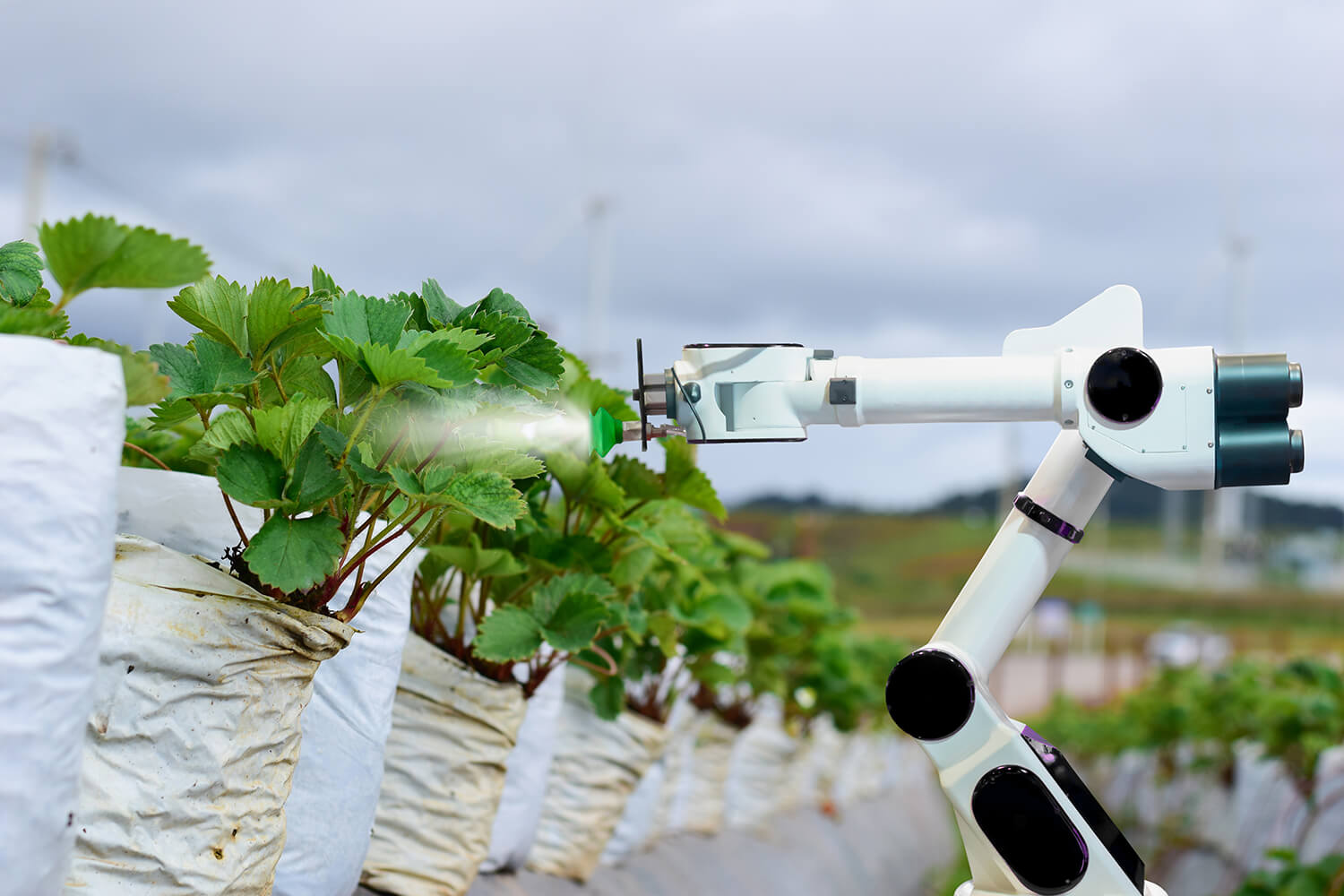 The small-sized electric robot OZ, developed by Naïo Technologie, works brilliantly as an „agrarian helper”, for example. The device operates with a GPS system to move smoothly through the rows. Meanwhile, a system of cameras and lasers helps it distinguish between a weed and a crop.

Another agricultural robotics solution is the Toutilo robot by Touti Terre. A true support for farmers who have to do their daily work in a very tedious position, alternating between kneeling and standing. You can comfortably stand on the vehicle and move between the rows of fruit and vegetables. The working time spent on weeding is reduced by up to 20 per cent.

A self-sufficient, fully-automated farm in the heart of the city and a closed-loop system? This is not a pipe dream, but a reality in the Belgian capital. This is where Europe’s largest rooftop urban farm for growing vegetables and breeding fish is located, with a surface area of over 4,000 square metres.

On top of the Foodmet food hall there are open beds, but also automatically managed greenhouses. The energy used by the farm is mainly derived from the energy lost by the building and from solar panels. The power 'lost’ in Foodmet’s cold stores is recovered using a heat pump. 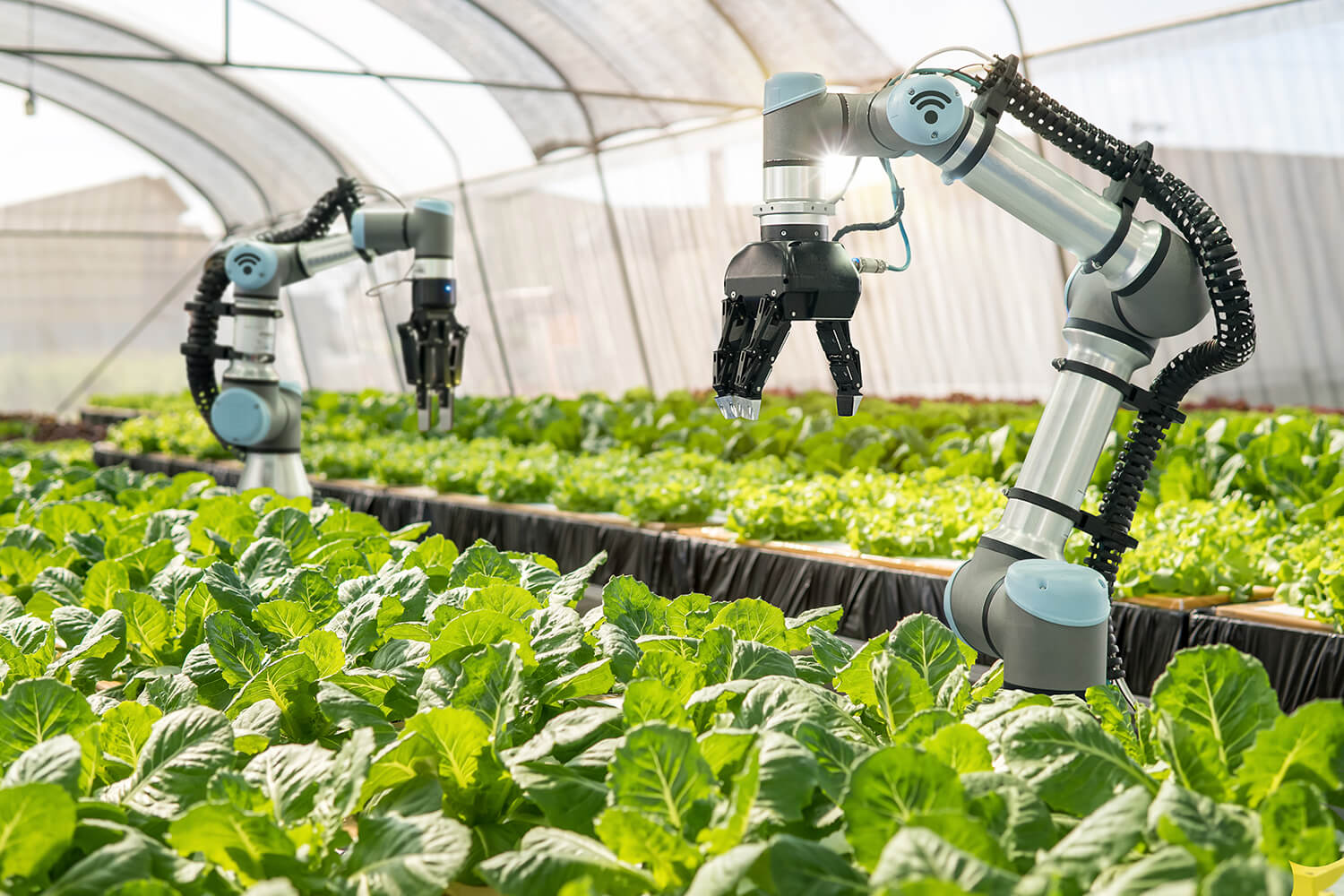 But that is not all. The faeces of the fish kept on the farm are used to fertilise the plants. Biofilters purify these metabolic waste products and convert them into nitrates, which are an excellent way of „feeding” vegetables.

Steven Beckers, the founder of BIGH (Building Integrated Greenhouses), is also planning to implement this type of concept in other European cities. Upcoming projects? Paris and surrounding areas.

Biotechnology can help to partially defuse the crisis of insufficient access to resources such as meat. The latest developments in this field include, e.g. synthetic meat produced under 100 per cent laboratory conditions or as a result of processing other plant-based components. Such meat-not-meat has similar nutritional value when compared to its standard counterpart. 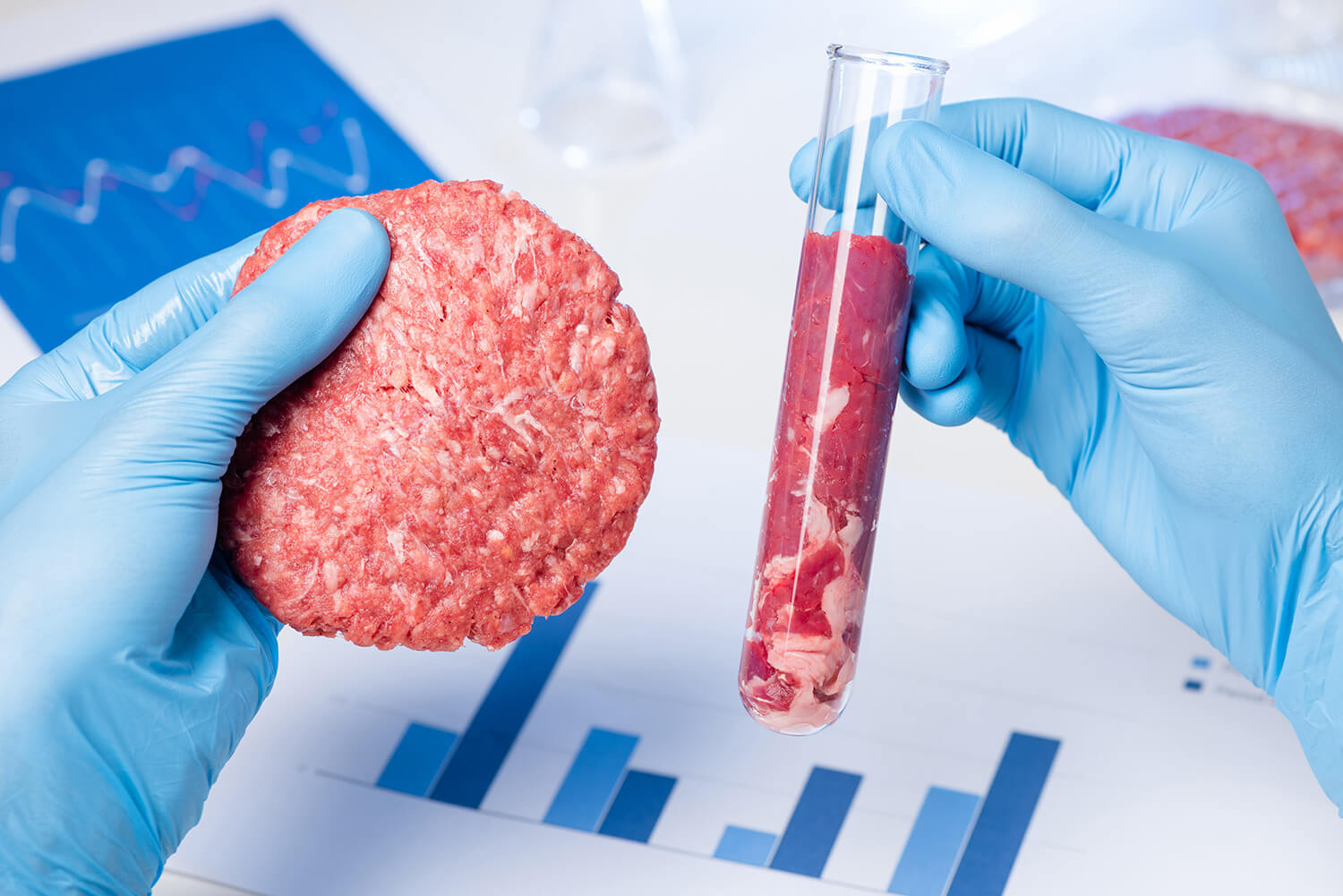 It is also worth mentioning other ground-breaking developments. Today, the company Arborea, is testing plants created from 'bionic leaves’, which have the ability to grow and develop even in very unfavourable soil conditions. Like their natural 'representatives’, these artificial plants absorb CO2 and produce oxygen, besides yielding edible and nutritious ingredients.

The technological solutions outlined above are just a prelude to what needs to be done to curb and, ultimately, to resolve the global food crisis.

Decision makers face numerous challenges. It is not only about access to raw materials and to technology, but also to infrastructure and knowledge. It is also about bridging the gap between the continents and the East and West of Europe. These are tasks that will take decades.

Technologies can eliminate these constraints, which are the components of the existing crises. They address issues such as labour shortages or poor quality and inadequate yields. And, above all, they allow decisions to be taken on a long-term basis.